Meet the Dog of the Week: Reggie

Meet Reggie; who will knock you down with his love

Meet the dog of the week: Reggie

Reggie’s best buddy Chloe has all the info about Reggie

Meet the dog of the week: Reggie. Reggie loves to cuddle and snuggle! 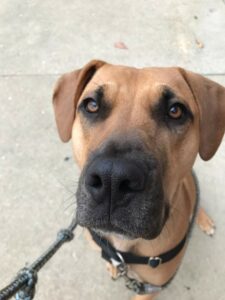 Breed: Mutt (Rhodesian Ridgeback and others)

What are Reggie’s favorite foods? Reggie LOVES getting a peanut butter or yogurt filled Kong after his walk. Although he would also be happy to help you with any and all leftovers, or the occasional street pizza.

What are Reggie’s favorite tricks to do for a treat? Reg does a fabulous sit and lay. Though truth be told, we spend most of our time playing and not doing tricks.

What is Reggie’s idea of a perfect day? An entire street pizza to himself for breakfast, endless snuggles and fetch time. Also, playing in the backyard with his best friends/neighbor golden retrievers who have just as much energy as he does. Followed by some nice rice to soothe his inevitably upset tum. And more snuggles with his humans.

Favorite Activity: Playing with his besties, both human and dog! 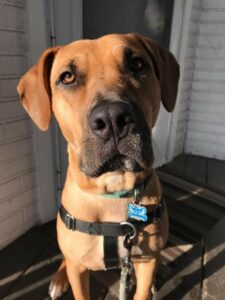 What challenges did you encounter with Reggie? Reggie does enjoy picking snacks up off the ground, he also is a very strong boy and used to pull quite a bit. So I’ve had to train my eyes to spot even the smallest possible street snacks and we’ve worked on slowing down/heel. However, since he’s been using a gentle leader his pulling is little to none and only comes out with the occasional squirrel.

What is your favorite memory of Reggie? The way Reggie greets me is the best! He comes running and immediately jumps up to give me a hug. He is always so excited and makes me laugh because of how eager he is, I just have to make sure that I don’t have anything in my hands because it’s likely to be dropped or knocked down.

If Reggie had a catch-phrase, what would it be? “We have three options: we can play, we can snuggle, or we can play.”

If Reggie was a famous movie character, who would it be? Reggie is Scooby-Doo. You cannot convince me otherwise. He may not be a Great Dane, but he would be the best Scooby-Doo. Also, with his affinity for snacks, it is perfect.

Thanks for reading about our good pal Reggie

We are so glad you got to meet our dog of the week, Reggie, he is ready for his Scooby snack!  Keep your eyes peeled for more dogs of the week!