Meet the Dog of the Week: Coltrane

Meet Coltrane: The sweetest most handsome guy in town!

Meet the dog of the week: Coltrane

Extra! Extra! Read all about Coltrane from his #1 friend Chloe

Time to meet the dog of the week: Coltrane. There is nothing he loves more than belly-rubs from Chloe, also if you happen to have some treats he would love to show off his tricks! 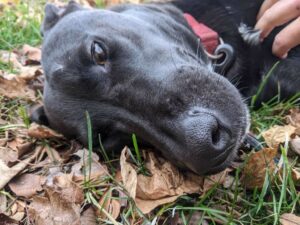 What are Coltrane’s favorite foods? Coltrane loves greenies and chicken! He is definitely a treat hound and will try anything at least once.

What are Coltrane’s favorite tricks to do for a treat? He loves sitting and giving me his paw. Also, he loves rolling over on his side.

What is Coltrane’s idea of a perfect day? Coltrane does a solid “sit” and “shake”,  and he also works on “touch” with his dad. But my favorite trick to do with him is “boop”, he is a very smart boy!

Theme Song: Blue Train by John Coltrane –  has to be Coltrane for Coltrane, and Blue Train covers all of Cole’s varying amounts of energy.

Favorite Activity:  Lately, Coltrane has been big on the belly rubs, BUT he absolutely LOVES burying his face in the snow, and as I like to call it “making snow angels” aka, just rolling around in the snow like crazy. 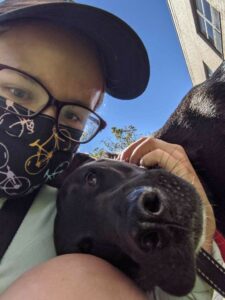 What challenges did you encounter with Coltrane?  At least partially due to the pandemic, Coltrane has been dealing with a lot of separation anxiety while away from his people. However, his reactions to other dogs and people vary, he really is the sweetest boyo in the world, just very protective of his loved ones. So we do our best to avoid other folks when out and about and just focus on having our own playtime.

What is your favorite memory of Coltrane? We had a blast in the snowstorm that happened to cap off the winter season this year! It could be pretty exhausting walking through that snow all day but ending the day with Cole always made it worthwhile and reminded me why I love playing in the snow myself. His joy is contagious!

If Coltrane had a catch-phrase, what would it be? “There are only two seasons. Snow season and stick season, but belly rubs belong in both.”

If Coltrane was a famous movie character, who would it be? Inigo Montoya – just the right level of sophistication, goofiness, loyalty, and honor for this sweet, loving, ever-regal boy

Thanks for reading about handsome boy Coltrane!

We are so glad you got to meet our dog of the week, Coltrane, also he says if you are finished reading this, you should have time to give him some belly-rubs. Lastly, be sure to check out our other dogs of the week!